What Happens When an Ex-Spouse Breaks the Marital Settlement Agreement?

In 2020, it was estimated that 39% of marriages ended in divorce. If you are someone who went through divorce, you may be struggling with a spouse who fails to abide by your marital settlement agreement. They may fail to make payments for alimony, for example, or they may fail to pay their part of the marital debts. They may not honor custody agreements or try to deny you parenting time with your children.

When this happens, it can be helpful to have a family law attorney in your corner to help you determine what you can do. In some cases, you may be able to work it out with your ex without going to court, but in others, you may end up needing to bring your case before a judge.

A Marital Settlement Agreement Becomes the Basis for the Court Order

The end product of the divorce is a series of agreements between the former spouses that are signed by each party. This is the marital settlement agreement, and it is ultimately a part of a court order that each party must strictly follow. The divorce agreement is a legal contract between two parties that has the force of the court behind it. There are consequences for not following this agreement. 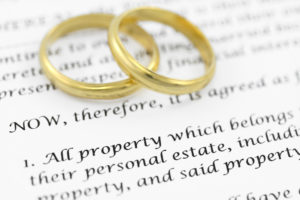 Consult With a Family Lawyer About What Can Be Done

What happens when a spouse is not following the marital settlement agreement depends on what the conduct is and when it happens. If you and your estranged spouse have agreed to a settlement but the divorce has not yet been finalized, you should first consult with your family law attorney. It may require renegotiating the terms of the agreement before the divorce becomes final.

When it seems unlikely that one party will follow the divorce agreement, it may not make sense to sign it as is. Even if it costs time and money, you need to make sure that you protect yourself. Once a divorce agreement is finalized and becomes part of a court order, it is difficult to change.

Try to Act as Part of a Strategy

A bigger challenge comes when the divorce is finalized and your former spouse is not following the agreement. This is a difficult situation that must be worked out because your rights are at stake, and you should immediately consult with your divorce attorney to figure out how to proceed. One thing that your lawyer will likely tell you is that you need to act very deliberately. This means that you will need a multipart strategy to deal with the problem.

Even still, it is best to avoid court when the agreement is not being followed. Going to the judge should be a last resort unless there is an emergency situation that needs to be addressed immediately.

Your family lawyer will tell you that you need to document every situation carefully. Eventually, you may need a record of each violation to prove a pattern of behavior. Documenting violations can include a number of things, such as:

Try Talking With Your Ex-Spouse First

All the while, you need to raise your concerns with your ex-spouse to let them know that they are violating the agreement. Perhaps they did not realize that there was a problem with what they did, or they may be trying to see what they can get away with in terms of behavior.

Either way, you do not lose anything by trying to have a conversation about the situation. The best dispute is one that is avoided, and some communication can go a long way. While it is not necessarily your obligation to fix their lack of compliance, you may need to show later on that you tried to address the situation with your ex-spouse. Many times, the problem results from a misunderstanding that can be resolved with a conversation.
If the behavior persists and you are unable to resolve it among yourselves, you have legal options available to you. These both involve the court, so it is best to go down these roads only if all other options have failed.

You Can Seek a Modification of the Agreement in Court

Assuming the divorce is final, your divorce attorney may advise you to make a legal filing seeking a modification of the agreement. Usually, in order to get a court-ordered change to an already-signed agreement, you would need to show that there were changed circumstances. One thing that could persuade the court is proof that the other party is not following the agreement as ordered by the court. This could help protect you in the future in the event that another breach occurs.

Contempt of Court Is a Drastic Option

The most drastic option if one party is breaching the marital settlement agreement is to file for contempt of the court. This is drastic because contempt of court can be a criminal charge. The punishment for this might even include jail time if the offense is serious enough. If you file a contempt of court action, it will send a serious message to the other party that you will not tolerate their failure to follow the agreement.

Before you go into court on a contempt charge, talk to your divorce lawyer to get their opinion whether the ex-spouse’s conduct is serious enough to support the charge. For example, if they are five minutes late to pick up the children, the judge would likely not grant a motion for contempt of court. However, if they do not give you your custody time or are refusing to transfer property required by the marital settlement agreement, this might be enough for the court to find someone in contempt.

What Happens If My Ex Is Found to Be in Contempt of Court?

If your ex-spouse is found to be in contempt of court, what happens next depends on the part of the agreement they are breaking. If, for example, your ex-spouse has defied orders for support payments, the court may have their wages garnished or put a lien on their property. If they fail to allow you parenting time, you may be granted additional parenting time to make up for it or the divorce agreement may be modified to ensure compliance. In certain cases, the other parent can lose their rights entirely or may face criminal charges.

If you have any concerns about post-divorce issues, including failure to follow the divorce order, contact Jeralyn Lawrence or another family law attorney at Lawrence Law at (908) 645-1000. Our Watchung and Red Bank divorce lawyers can speak with you over the phone or meet you online.